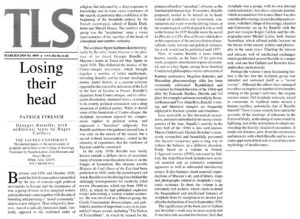 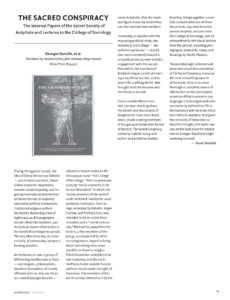 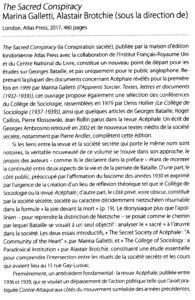 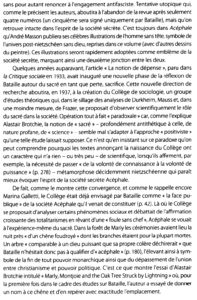 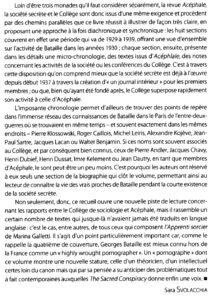 The Sacred Conspiracy: The Internal Papers of the Secret Society of Acephale and Lectures to the College of Sociology, by Georges Bataille, edited by Marina Galletti and Alastair Brotchie
Atlas Press, 9781900565950, 480 pp., 2018

It’s March 1937, and in the Forest of Marly near Paris, where a group of initiates meet under cover of darkness beneath a lightning-struck oak. These are the members of Acéphale, a secret society whose tight-lipped participants left scant clues as to what this whole clandestine affair was about — until now. Chief amongst them, and founder of the society, was Georges Bataille, philosophical theorist, novelist, anthropologist and, so it has been imputed, pornographer. Although Bataille has been described as “a vital figure in modern European thought,” he remains less well known than some of his illustrious contemporaries (and occasional adversaries) such as André Breton or Jean-Paul Sartre.1  To study Bataille’s work is to come up against uncompromisingly bold and transgressive concepts that can often seem bleak and disturbing, whilst at the same time revelatory. Bataille not only peers into the abyss of human experience, but readily plunges down into its murkiest recesses.

The Sacred Conspiracy is published by Atlas Press, a company which has a well-deserved reputation for seeking out and making available an “anti-tradition” of avant-garde literature that might not otherwise be commercially available. The book under review is a fine example of that endeavour, being a well-produced artifact in itself, as well as offering up an authoritative and wide-ranging approach to its subject matter. Up until the 1990s, Acéphale, a covert organisation whose members gathered together in the increasingly tenebrous atmosphere of pre-Second World War France, was an aspect of Bataille’s career and that of his fellow initiates about which very little was known. Now, thanks to the efforts of co-editors Marina Galletti and Alastair Brotchie, The Sacred Conspiracy offers a wealth of hitherto untapped material about this singular episode in French intellectual life.

The term Acéphale means “headless,” which helps explain the strange figure drawn by the artist André Masson that adorns the book’s cover and was used at the time to signify the aims of the society. This headless Vitruvian figure, with a labyrinth design on his stomach and genitals covered by a skull is a representation of “the leaderless crowd […]the image of an existence in a ‘universe where God is dead.’”2

That latter phrase provides evidence of how influenced Bataille was by Friedrich Nietzsche in his opposition to the, as he put it, tricephalous monster that was Fascism, Communism and Christianity. In effect, Bataille called for the downfall or decapitation of the God-chief in favour of the leaderless crowd. However, should that seem a familiarly egalitarian or anarchistic notion, for Bataille the subsequent emancipation felt by individuals would transcend mere social or economic liberation and should see them embrace a “conscious will to expenditure” in a spiritual sense, freed from concerns about an afterlife and, indeed to exercise “Joy in the Face of Death.”3

Those who took part in encounters at the stricken oak found their lives were henceforward strictly dichotomised between periods of “tension” or “license,” between (in other words) the utmost “sacred, right, noble and auspicious” behaviour that respected rules and society’s taboos, and wholehearted “sacred left, ignoble and inauspicious” behaviour which wallowed in Dionysian “promiscuity, disorder and debauch.”4 “WE ARE FEROCIOUSLY RELIGIOUS,” Bataille proclaimed, though his definition of religion fundamentally entailed the death of God (“that ridiculous syllable”), which leads the editors to speculate that Bataille’s real aim was to replace religion with the sacred, with the latter seen as a sort of ultimate effervescence.5 As Michel Surya put it in his Prix De Goncourt winning biography of Bataille (Georges Bataille: An Intellectual Biography), the Acéphale project was a religion in the sense that it accorded death “the place no one else had given it.”

Michael Surya writes, “Death is linked to the earth, only to the earth (and not to the heavens) to rotting, decomposition, to the buried body turning into a cadaver… Acéphale was this recognition: a community of seers, eyes wide open on the stupefying work of death.”6 Heady stuff, and only a brief insight into the sort of fearsomely uncompromising concepts Bataille propounded.

Not, it should be said, that this is a book wholly taken up by the daunting figure of Georges Bataille or, for that matter, the secret society of Acéphale, with its full title making reference to the College of Sociology. This reading and discussion group was, in effect, the public face of Acéphale, which staged weekly lectures to a small group of attendees on “social existence in all its manifestations in which the active presence of the sacred is clearly to be found.”7 A variety of the texts presented at the College are reproduced throughout the book, and offer a chance to hear what Bataille’s associates had to say about the whole venture, with distinguished French intellectuals such as Roger Caillois, Pierre Klossowski and Michel Leiris making some particularly noteworthy contributions. It is also worth noting that The Sacred Conspiracy is not a straightforward history of Acéphale or the College of Sociology. Although there are some truly insightful commentaries provided by the editors on what took place throughout, as well as a detailed chronology of events, this book is in effect a repository for the papers written by Bataille or those who were in some way associated with Acéphale and the College that have come to light. As fascinating as these papers are, it’s fair to say that they can also be quite densely packed with all kinds of gnomic utterances and abstruse pronouncements. To get the most out of The Sacred Conspiracy, it’s best not to try and skim-read it.

Ultimately, what stops this book from being simply an archive of epistolary discourse between long-gone erudite theorists are the comments by the editors and the documents presented that deal with what it meant to be an Acéphale initiate. There are some intriguing accounts of this found in The Sacred Conspiracy. Even before getting to the site of an “encounter,” as Bataille termed it, he would issue detailed instructions about how members should conduct themselves in getting there. These read like carefully choreographed espionage instructions, as Bataille enjoins participants to board a certain train and “find a seat in the carriage away from everyone else.”8 Once they arrive, they are to follow Bataille’s longterm friend and collaborator, Georges Ambrosino, “whilst observing silence.” Using a series of hand gestures, Ambrosino would lead the way. Once they are brought to the site of the encounter, the initiate is to “go alone right up to the burning flame, pass your hand through it (or as close as you can) and then return to take your place with the others.”9 Then, once the encounter is over, “keep your silence on the return journey,” alight at Saint-Lazare railway station, and “leave on your own.”10

As for what actually took place at the lightning-struck oak, quite apart from tales of a human sacrifice being proposed but never carried out, the evidence in the book points to it being more of a collective meditative invocation rather than a rigorously-organized ritual. In terms of what was actually invoked (if that is the correct term in this instance), Bataille’s note to his confederates from October 1937 talks about “the desire to seek out and encounter a presence that infuses our lives with purpose…The ENCOUNTER which is attempted in the forest will take place only when death manifests itself there. To anticipate that presence is to seek cast off the vestments that veil our own death.”11 Or as Bataille puts it in more clearly affirmative terms elsewhere, ‘’Joy in the face of death means that life can be glorified from its roots to its summit.”12

The Sacred Conspiracy is a fascinating book, albeit one which does not yield up its treasures easily. Because it is not a straightforward narrative history, but rather relies more on individual voices vying for the reader’s attention (with Bataille’s easily the most prominent) it can, at times, feel as if one has tuned into a rather mysterious ongoing discussion in which the participants can be compelling, esoteric, combative and, every so often, mordantly humorous — certainly laughter, particularly the sort paradoxically evoked in anguished or tragic circumstances, was a key aspect of Bataillie’s philosophical thought. The Sacred Conspiracy is a book to be revisited, mulled over and discussed. The editors are to be congratulated for compiling such an enthralling document.