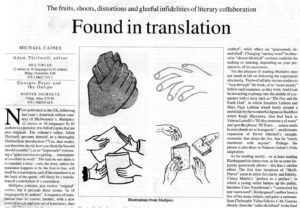 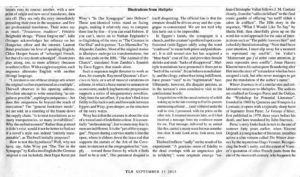 Is it possible that when he wrote his short story “The Winter Journey” in 1979 as part of a publicity bulletin for the French publisher Hachette, Georges Perec sensed he was initiating a collaborative novel that would involve almost two dozen contributors and span more than three decades in the making? It seems unlikely. After all, the story is modest in length and was relatively unknown by the time of Perec’s death in 1982. Yet, in his introduction to Winter Journeys, which collects the collaborative novel into one volume, editor Alastair Brotchie claims that “The Winter Journey” has become Perec’s “most oft-reprinted text, especially after his early death.” Then there are the other “Journeys,” those stories inspired by Perec’s that make up the bulk of Winter Journeys. The first appeared in 1992. Eight more followed by 2001, prompting a first edition of Winter Journeys to be published, and in the ensuing twelve years, that number more than doubled, necessitating this new edition. It is an impressive history for an almost forgotten story, and it doesn’t seem accidental. The very structure of Perec’s story invites one to make a “Journey.” And this invitation has been avidly taken up by his fellow travelers, members of the group of writers and mathematicians who call themselves the Oulipo, the “Workshop for Potential Literature,” who are devoted to creating and exploring new possibilities for the creation of literature.

Of course, Winter Journeys opens with Perec’s story, which tells of Vincent Degraël, a young literature scholar, who while staying with a friend outside Le Havre shortly before the outbreak of World War II discovers a curious book titled The Winter Journey by unknown author Hugo Vernier. Degraël quickly recognizes Vernier’s most striking lines from their appearance in works by other late nineteenth-century French poets. But as is evidenced by the publication date of The Winter Journey, Vernier didn’t steal from them; they stole from him. Increasingly sure of Vernier’s importance to French literature but lacking proof—even the copy of The Winter Journey that he’d read in Le Havre was destroyed during a bombing raid—Degraël ends his days after the war in an insane asylum.

The next two “Journeys,” by Jacques Roubaud and Hervé Le Tellier, establish something of a template for most of the others that would appear by 2001: they draw on all the preceding “Journeys”; their titles, to quote the (fictional) author Reine Haugure, “retain elements of the verbal (rather than graphic) sonority of George Perec’s original title” (Perec’s title is Le Voyage d’hiver, while Roubaud’s and Le Tellier’s are, respectively, Le Voyage d’hier and Le Voyage d’Hitler); and they claim that Perec’s story was true, not fictional. Their stories, then, expand the implications of “The Winter Journey” by adding new characters and settings as well as by drawing attention to the porous boundaries between fiction and reality.

As a whole, the “Journeys” are playful and erudite, deeper implications often glimpsed in their gamboling, ludic surfaces. But for all of the invention on display, and for all of the intriguing ideas they hint at, there are times when Winter Journeys seems to exhaust possibilities rather than raise or explore them, a feeling expressed by Marcel Bénabou in his entry “The Forthcoming Journey.” Appearing near the end of Winter Journeys, Bénabou offers what is essentially a work of criticism that deepens the myriad “Journeys” through his observations. At first expressing admiration for the other “Journeys,” Bénabou admits to feeling a degree of satisfaction in not having joined in. When he had thought about writing a “Journey,” he tells us, his “sole ambition was to carry out systematic research into the potentialities of Perec’s text,” an ambition he feels was not shared by the others, who instead “had given way to a self-congratulatory exhibition of virtuosity” that closed off potentialities, weakening his desire to make a contribution.

Ironically, it is what Bénabou admires about Perec’s works that might have led to such a proliferation of “Journeys” in the first place. As Bénabou enthuses, “For those who know how to approach them, Georges Perec’s writings not only provide a rare pleasure, they can also sometimes offer an even rarer gift: a sort of light, yet tenacious fever from which the only means of recovery—almost with regret—is to take up a pen.” In fact, sometimes their structures encourage writing. Bénabou tells us, for example, that following its own logic, Perec’s novel Life: A User’s Manual should have had one hundred chapters but had only ninety-nine, and Perec’s autobiographical work I Remember (receiving its first English translation this May) which consists of 480 entries all beginning with the phrase “I remember…,” contained blank pages at the end.

“The Winter Journey” makes a similar invitation. The Winter Journey is the title of Hugo Vernier’s book, comprising two sections. The first tells of a young man on a journey that appears to be some kind of failed initiation rite. The second, making up eighty percent of the book, is “a long confession of an exacerbated lyricism, mixed in with poems, with enigmatic maxims, with blasphemous incantations” from which the other poets plagiarized. The Winter Journey is also the title of Vincent Degraël’s 400-page research diary, the last 392 pages of which were blank. Finally, “The Winter Journey” is a story by Georges Perec that tells of Degraël’s and the narrator of The Winter Journey’s failed searches. If it resembles its namesakes, Perec’s story too has a second part, one that is implied, including all that lies outside of it. While it might be true, as Bénabou claims, that “if these Voyages [“Journeys”] would one day come to an end, and make up a huge narrative jigsaw puzzle, in the spirit of Perec, it would be better if one piece were missing.” But he must also be aware that by leaving the puzzle unfinished, he invites more contributions, thereby reviving what he hopes has run its course. Thankfully, whether or not another “Journey” is written, it hasn’t.