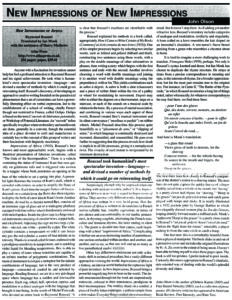 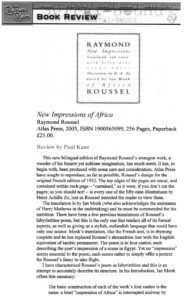 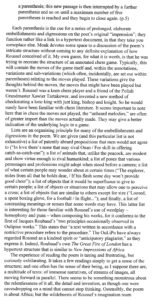 Raymond Roussel’s influence on French literature of the 20th century is considerable, among his admirers numbered Surrealists (Breton, Aragon, Desnos), ex-Surrealists (Leiris), Oulipians (Queneau, Mathews (ok, he’s not French)), nouveau romanciers (Robbe-Grillet’s For a New Novel contains an essay on Roussel), and other leading writers or artists (Gide, Cocteau, Duchamp). He also holds the distinction of being the only author Foucault ever wrote a whole book about. Of course, each saw in Roussel what they most looked for: the Surrealists saw his fantastically imaginative works as products of the unconscious, Oulipians see his “method” and formal poetic rigor, while Robbe-Grillet admired his descriptions behind which there is nothing (I paraphrase R-G). Foucault, well, I read the book, but I haven’t any recollection of what it was all about (for what it’s worth, it’s in English as Death and the Labyrinth).

New Impressions of Africa (Nouvelles Impressions d’Afrique) is perhaps his most infamous work. A long poem in four cantos, the work mostly consists of parenthetical sections imbedded one within another (and another and another) at times up to five deep (and then there are the footnotes with multiple parentheses). Throughout, Roussel maintains alexandrines (a French twelve syllable, the rhythmic equivalent (as far as prevalence and conventionality) as the English iambic pentameter) in rhyming couplets, alternating the French masculine and feminine rhymes (feminine rhymes ending in silent e’s).

The cantos, shorn of their parenthetical sections, are each short poems on some site in Africa (possibly from his travels there). For instance, Canto II “The Battlefield of the Pyramids” is, at its base level:

Merely to cite him joining in combat,
At an age when his coat and little hat —
The full-length greatcoat — from which each construes
A daunting aura, whatever his views —
[…]
grey greatcoat, black hat […]
Still on that last sheer rock his uniform
Had not begun to magnify his form,
Means, pensive, we forget for a moment
Egypt, its evening, sun and firmament. (173)

But, what that first ellipsis leaves out are (if I counted correctly) 657 lines of parenthetical verse and footnotes (Canto II is the longest), while the second ellipsis is only two and a half lines. From the first parentheses the verse moves into double parentheses “((“, triple “(((“, up to quintuple “(((((“. Roussel, thankfully, aids comprehension through the multiple notation instead of just embedding single parentheses. Even with these the poem is a disorienting work to read, but the notation enables one to more easily track down the other side of some passage that is interrupted (as I did above).

Even on two readings, much of the content remained enigmatic to me. It jumps from it’s original African setting and covers a range range of topics. Roussel makes great and lengthy use of the list. In those 657 lines mentioned above, there is a list of things mistaken for other things, visually, which goes on for 416 lines, and a shorter (41 lines) list of things that shrink (“When cruelly blown the dandelion’s head”).

Lest one think that Roussel just wrote a short poem that rhymed and then added a rhyming parenthetical, then another, it is worth noting that often the rhymes cross from one parenthetical level to another or from main text to footnote and back. The parentheticals often integrate quite smoothly and aptly with the lines outside them, such as the ending of Canto III where:

Pleasantly dream of tears and mourning dress;),
Of being thus delivered from distress. (205)

The two lines both close other sections, only vaguely related, yet also work with each other not just as rhyme but as content.

Elsewhere, I read how Michel Leiris found numerous proverbial phrases within the work and claimed that Roussel wished to be a moralist. This doesn’t feel far from the truth, with the slightly didactic tone of the poem.

One interesting list in the work concerns polysemous words including “white” (blanc) as “civilized” or a “chalk cube”. This example is notable because it is one he uses in his “How I Wrote Certain of My Books” to explain his method for composing the story “Among the Blacks”. One wonders whether the other words in the list here are also clues to his method.

Moving away from Roussel’s text, I should note the 59 drawings by Henri-A. Zo that accompany the text: one page of illustration opposite each page of verse. Roussel hired a private detective firm to deliver his instructions to the illustrator. Zo did not know who had hired him nor did he know what he was illustrating, other than the short descriptions Roussel wrote for each of the fifty-nine drawings (his constraint). The drawings themselves are unremarkable and illustrate small portions of the page which precedes them.

New Impressions has been translated into English in part a few previous times (Kenneth Koch’s version of Canto III appears in Exact Change’s How I Wrote Certain of My Books, while Andrew Hugill’s version of Cantos I, II, and IV are most easily available at his website), this is the first complete translation and it is impressively done. Ian Monk, a member of the Oulipo and translator of the Atlas Press edition of Francois Caradec’s well-regarded biography of Roussel, translates the poem into rhyming iambic pentameter.

In his introduction, Monk explains the focus of his translation: formal qualities. He has rigorously retained the placement of the brackets, footnotes, and number of lines, as well as maintaining the rhyming couplets (though English cannot reproduce the masculine and feminine rhymes) and transforming the alexandrines into iambic pentameter. Monk states how he concentrated on this first and than the literal meaning, while still trying to be as faithful as possible to the content. While I did not compare the whole poem, many of the passages I did compare are either literally translated (adjusting for syntax and organization of phrases) or at least similar, keeping the same place in the work without a literal translation (as in the lists where there is a similarity by theme).

From what I’ve seen in Caradec’s biography, there is evidence (i.e. manuscripts) to suggest that Roussel actually composed by listing rhymes down the right side of the page and then filling in the rest of the lines. This, similar to his “method” accounts for some of the oddity of his content, and I think speaks well for Monk’s translating decisions. The rhyming iambic pentameter reads exceedingly well. In short, the translation is a superior job, but a translator who certainly knows the work (I’d also recommend his translation (recently repressed by Godine) of Three by Perec).

A great example of Monk’s skill are the first four lines of Canto I. Roussel’s lines read:

[A quick literal translation:
Doubtless to consider, it hits home to reckon,
being told that there, behind that gate/door
the sainted king, Louis IX, was, three months, kept prisoner,
how much does that fact seem tangible and new]

It surely makes us think and slow our gait
To learn that here, behind this very gate,
Saint Louis IX was three months held in keep!
But this fact, true and tangible, we keep (17)

You’ll note that Roussel rhymes identical words that have different meanings (again returning to his method), while Monk, retaining the content (if not literally) rhymes one set of identical words (keep/keep) and one set of homophones (gait/gate). That’s not an easy translation job.

Finally, I’d like to discuss the book as an object. Atlas Press (who I have to say consistently impresses me with their publications, and now that they have online ordering set-up you can order direct) did really nice work on the design. The book is not quite square, wider, proportionally than most books. The cover recreates the intertwining parentheticals of the poem: “Raymond / New Impressions / Translated and intro- / with fifty-nine / Atlas Press / illustrations by H.-A. Zo / duced by Ian Monk / of Africa / Roussel”. They have gone to some work to reproduce the format of the original. The book is published with uncut pages, but — apparently an unusual and more difficult way to do this — only uncut at the top (in most cases if left uncut, the top and front end would be uncut). In this way one can page through the book and seeing the facing pages of French/English text, but the illustrations with facing instructions (the ones Roussel wrote for Zo) have to be peered at with the pages still uncut (or you cut the pages and see them regularly). This is the way the original work was designed according to Roussel’s wishes. The only real downside to the presentation is the slipcase. It is a rather flimsy item and I found it rather difficult to extract the book or put it back in. The binding of the book is such (I suspect due to the uncut page feature) that the cover extends slightly out from the top and bottom edge of the page register, enough that the slipcover seems necessary to keep the cover from being bent and battered at the top and bottom. Alas, a nice hardcover with a similar slipcover would probably have made costs prohibitive. Either way, the book itself is a well done item.

This is a worthy addition to the English translations of Roussel. According to Atlas Press there is also a translated book of Roussel’s two plays “The Dust of Suns” and “The Star on the Forehead” forthcoming.

To my announcement some time ago concerning the release of the volume, a reader “SC” made this comment, which I feel the need to respond to:

When will we be relieved of poet’s rhyming “translations”? How can they possibly be accurate as to meaning? A literal translation facing the French would have been infinitely more useful.

SC seems to be under the impression that the “meaning” of a poem solely resides in the semantic content of the words. I don’t consider this to be true, particularly in the case of Roussel where the formal qualities of his works were very important to him. For more on this I’d highly recommend Harry Mathews’ essay “For Prizewinners” (in his The Case of the Persevering Maltese) which I posted about previously.