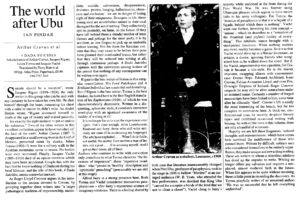 The word “Dada” brings to mind an international range of extreme modernist antics–lively nights at the Cabaret Voltaire, disquieting collages, the savage poetry of Tristan Tzara (captured in the inspired lunacy of his 1921 Dada Manifesto on Lukewarm Love), Marcel Duchamp’s “Readymades,” or Francis Picabia’s canvases of human figures as functionless machines. Dada began as a limited franchise, with key outposts in Zurich, Berlin, Paris, and New York. Preceding the Surrealist movement by several years, and often inspired by the Communist Party (though not tied to it), its origins lay in a militant nostalgia for a lost Eden. If Dadaists wished to destroy art, they were moved by an imperishable aesthetic ideal. As a key proponent, Hans Arp, once declared, Dadaists sought “an art based on fundamentals to cure the madness of the age and a new order of things that would restore the balance between heaven and hell.” This new collection of work by four “fringe” members of the Dada movement in 1920s Paris strikes a more somber note with its stress on suicide, yet the book’s title is something of a publicist’s misnomer. Jacques Rigaut is the only confirmed suicide among the group, and while Jacques Vache did die of a drug overdose, many, including author Michel Leiris, claimed that his death was accidental, characterized as deliberate by those aiming to enhance Vache’s cultural cache. Arthur Cravan and Julian Torma simply disappeared, wandering into, rather than jumping towards, the cracks of avant-garde history. Of the four only Rigaut is genuinely obsessed with themes of self-destruction. The selections from Cravan, Vache, and Torma reveal a broadly defined set of interests — the new excitement of the metropolis (particularly New York), the frustrations of avant-garde badinage, the bitterness of literary rivalry, the torpor induced by middle-class life. In addition to strategically placed photographs and drawings — curiously haunting snapshots and doodles — the work of each “writer” (the editors insist on the quotations) is introduced with a biographical preface and followed by the reminiscence of a contemporary. The result is an inspired collection that captures the literary past in a moment of tremendous intimacy, as if these four bad-boy precursors of the Surrealist movement had rented at hotel suite for a raucous night and left behind a treasure trove of Dada debris.

The collection opens with Arthur Cravan — a boxer and poet, who once astonished an American boxing audience by concluding a match with a lecture on 0scar Wilde. Cravan’s scorched-earth energy dominates his writing: “Whoo–ee,” begins one piece. “I am off to America in 32 hours. Only been back in London from Bucharest two days before bumping into the man I was after: the man would meet all the expenses of a six-month tour. . . I found Mrs. Cravan on her own, and told her what had happened even as I was packing my trunks, for there wasn’t a moment to lose. In common time, and in three movements, I folded my silk hosiery, 12 frs. a pair, which put me on a par with Raoul the Butcher, and my shirts on which the remains of the dawn still lingered.” Cravan’s tone ranges widely, from adolescent invective to spacey tenderness. “Oscar Wilde Lives!,” Cravan’s tribute to the playwright in the form of a fantasized encounter with Wilde in Paris after the playwright’s death, is convincingly vivid, with Wilde whispering ” You are a terrible boy” to an adoring Cravan before disappearing into the night. Cravan also reports, malevolently, on a visit with Andre Gide (the two had traveled to Algeria together) who, in his role of official conscience of French Literature, fills Cravan with impish venom:

“M. Gide,” I began, “I have taken leave to call on you, though I feel myself duty bound to inform you straight off that I far prefer, for example, boxing to literature.” “Literature, however, is the only terrain on which we may profitably encounter one another,” he replied rather dryly. I thought: “He certainly lives life to the full.” We spoke about literature therefore, and he asked me the following question which must be particularly dear to him: “Which of my works have you read?

Although his disappearance in Mexico in 1918, after a bitter defeat in the ring, cast a shadow over his life, Cravan seems to have had the best time of his Dadaist colleagues — a conclusion borne out by several photographs reproduced here depicting the poet-pugilist strutting before the camera in boxer shorts.

The atmosphere becomes darker with Jacques Rigaut, whose “The General Suicide Agency,” an advertisement for a state-approved company preparing self-willed deaths, and “Lord Patchogue” (“Touch my forehead. Good! Now look at your fingers, they are stained with my blood”) suggest an intense consciousness, with only an attenuated grip on the world. Rigaut — a drug addict, gigolo, dandy, man-about-town — was a cult figure in Paris, a status that intensified when he was made the subject of Louis Malle’s brilliant 1966 film Le Feu Follet. Despite editor Terry Hale’s disapproval, Malle seems to have caught perfectly Rigaut’s exquisitely reposed morbidity. On November 6, 1929, he returned to a clinic where he was staying and — according to Andre Breton — “after paying minute attention to his toilette, and carrying out all the necessary external adjustments demanded of such a departure” — calmly put a bullet through his heart.

Julian Torma, whose life apparently ended at 31 when he vanished while on a solitary walk in the Tyrol mountains, is represented solely through the first English translation of his collection of aphoristic gems, Euphorisms. An unconventional “spiritual autobiography,” Euphorisms recounts Torma’s struggle against religious duplicity and his choice of a stoical atheism. “There are those who give no thought to believing and those who discover that they believe,” writes Torma. “The first are the real believers, like savages or sorcerers. The others are Jesuits or intellectuals, all the cooks who prepare the deserts of certitude.” Torma provides an aesthete’s lyrical appreciation of homosexual practices, declaring that “Sodomy…unveils more original anatomical perspectives: it reveals a strange effort to insinuate oneself into the subterranean labyrinths in which the animalcular tumult bubbles and the vital impetus inflates.” Just when one might think that the sexual politics of the Dada movement were confined to Cravan’s dank misogyny, Torma’s writing hints that the Dadaists were playing with erotic norms. Of all the figures gathered here, Torma comes the closest to a true intellectual, his aphorisms comfortably taking their place in the tradition (Dare one say this of a book published in a series called “Atlas Anti-Classics”?) of La Rochefoucauld and Pascal.

History intrudes in the excerpts from Jacques Vache’s celebrated War Letters, reminding us that, for all modernism’s supposed disgust with historical actualities, Dada simply provided another, more brazen form of mimesis. We tend not to think of Dadaists such as Vache as “war poets,” but here we have a brilliant perspective on the First World War as, well, a Dadaist performance encomp;assing inane word-play. “I was happy to receive some news from you,” writes Vache to a friend. “And even more, after all — to hear that you are in shelter — I’m bored a lot behind my glass monocle, I dress in khaki and fight the Germans — The disembraining machine functions with a lot of noise; and not far away I have a stable for TANKS — very UBIQUE animals, but joyless.” Something about the turn of that sentence — fighting the Germans as an afterthought to donning khaki — suggests Dadaism’s inspired cold-bloodedness.

Atlas Press appears to be a loosely-knit literary collective, an avant-garde publishing house (like City Lights Books in the United States) whose publications have imaginative layouts and a missionary purpose. This is the sort of respectability-snubbing enterprise that includes, instead of a predictable summary of Julian Torma’s “career” as a poet, a letter from a friend recounting in graphic detail a homosexual exploit with Torma in a Lille bathhouse. Much of the most intriguing material in 4 Dada Suicides is contained in some astonishingly learned footnotes — though this material might have been displayed more prominently. In the midst of a discussion of Cravan’s elaborate 1913 prank claiming that Oscar Wilde was still living in Paris, we must turn to th e endnotes to learn that Cravan was Wilde’s nephew, the son of the playwright’s brother-in-law. (The hoax, incidentally, was successful enough for the New York Times to conduct an investigation. ) Buried in these often-playful notes are some essential pieces of literary history — for example, that Parisian Surrealists would routinely telephone the mother of Jean Cocteau, a man whom they loathed on aesthetic grounds, to tell her that her son had been run over by a car.

Still, these strange gems are there, along with much else. It’s a happy paradox of 4 Dada Suicides that some of the century’s greatest repudiators of art have their after-life in this uncategorizably artful collection.

Originally published in the October/November 1995 issue of Boston Review.