An Anecdoted Topography of Chance — Reviews

Richard Hamilton in The Spectator, March 1996. 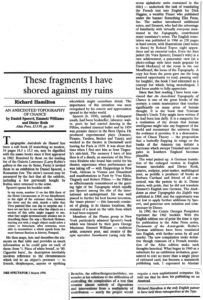 Robert Irwin in The Times Literary Supplement, May 1996. 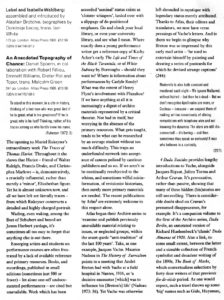 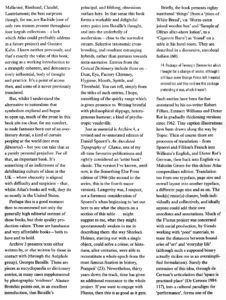 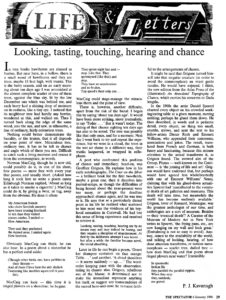 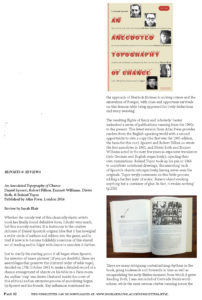 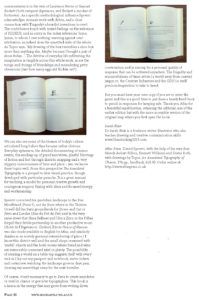 Christian Cummings’s studio after a fire, Pasadena, 2013, courtesy of the artist

UNDER THE RADAR: MAPPING THE RUINS

An Anecdoted Topography of Chance
Daniel Spoerri, with the help of his very dear friends Robert Filliou, Emmett Williams and Dieter Roth, with drawings by Topor
274 pp. Atlas Press

The mighty Atlas Press—London-based purveyors of “pataphysical texts,” Dada documents, Viennese Aktionist manifestos, and Oulipo anthologies—has reissued a legendary art book that uses a tabletop cluttered with the detritus of daily life as a jumping-off point and ultimately comprised a postmodern who’s who of the international avant-garde from the 1960s.

In 1961, Daniel Spoerri—a Swiss/Romanian dancer and avant-garde theater impressario turned Nouveau Realisme artiste—had only recently embarked on the “Snare Pictures” for which he became renowned—the leftovers from a meal secured to the surface of a table, then rotated to hang on a wall like a painting. For an exhibition of these works in Paris, Spoerri devised An Anecdoted Topography of Chance, a 54-page booklet mapping all the objects on the table in his Parisian flat, then forensically extrapolating from them in “the way of Sherlock Holmes” to create a fragmentary autobiographical literary masterpiece. 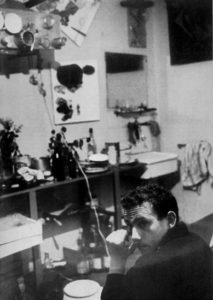 The Anecdoted Topography took on a life of its own. With initial assistance from Robert Filliou (discoverer of “Art’s Birthday” and a laborer for the Los Angeles Coca-Cola plant in the late 1940s!), and subsequent translations and expansions by Emmett Williams (European coordinator of the Fluxus movement and Editor in Chief of Dick Higgins’ Something Else Press) and Dieter Roth (literary sausage-maker and auteur of decay), the slim volume has quintupled in size since its first edition.

The more than 80 entries consist of a description of the article—a box of matches, a jar of instant coffee, a green Swingline stapler, wine stains, scotch tape, etc.—with Spoerri’s deadpan description and any anecdotal information accounting for its presence on the table. With each translation and republication, further layers of commentary were added, and responded to. The artist/writer/filmmaker Roland Topor contributed a scratchy line illustration for each entry. The anecdotal digressions diverge exponentially at the first branch, and often in Spoerri’s initial log.

The effect is a curious mixture of an ahead-of-the-curve conceptual literalism and absurdist free association that’s as funny and innovative as Flann O’Brien’s footnote-laden The Third Policeman or Alfred Jarry’s Exploits and Opinions of Dr. Faustroll, Pataphysician. Its sheer arbitrariness is something of a miracle, a form of haruspication—predicting the future from animal entrails, dummy!—that demonstrates how, in the human imagination at least, we can see infinity in a grain of sand. So what if it’s an infinity of sand? 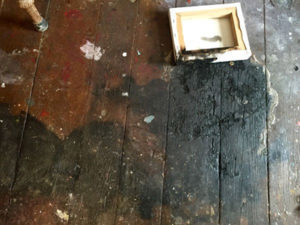 The floor of Catherine Howe’s studio, Germantown, 2011, courtesy of the artist.

Such lofty philosophical concerns don’t intrude on Jonathan Griffin’s On Fire, although it shares the same kind of dispassionate repertorial premise and alchemical agenda. A 100-page anthology compiling short profiles of 10 artists whose studios caught fire (most of them catastrophically), On Fire also possesses a remarkable literary tension produced by the dissonance between the mundane particularities of the case studies and the archetypal devastation that every oil-painting student has drilled into them. Sometimes that devastation manifests as predicted, other times not.

The book came to my attention because I’m quite familiar with one of the incidents—the  total destruction of Christian Cummings’ Pasadena studio (several of the artists profiled are in LA, where the book originated—though the fire reaches as far as Berlin), which destroyed the almost-finished sequel to CC’s Slavebation, his 2012 album of avant-garde visionary song-poems which I described in an earlier Artillery column as “the first great protest album of the 21st century.”

He also says, “It would have been better if I lit the match myself.”

This loss, along with the incineration of all of Cummings’ musical instruments, isn’t even mentioned in his account of the conflagration, which actually devotes a considerable amount of attention to his current obsession with rare cacti. He seems equivocal about the fire’s significance, suggesting that he feels he’s dodged the bullet of commitment that a professional workplace represents. He also says, “It would have been better if I lit the match myself.”

If Cummings’ portrait is the funniest and most unconventional, the most improbably compelling is the last—Brendan Fowler’s blow-by-blow account of the legal fallout after his (and Matthew Chambers’) Glendale studio was consumed by a fire spreading from a next door furniture factory. Chambers’ account opens the book, and the bracketing by two related narratives points to the organic word-of-mouth branching that determined its subjects. I would’ve liked to have heard from some less conventional artifact makers—The Institute for Figuring, for example, whose Chinatown facility was burnt out in 2013. But On Fire makes no claim to comprehensiveness, and in its way is as much a chance-determined group autobiography as the Anecdoted Topography.