The Tutu by Leon Genonceaux (tr. Iain White). Atlas Press. One of the most obscure and weirdest books of the fin-de-siecle, this is a great translation, first time in English. Absurd, ‘obscene’ and satirical. I recommend this enthusiastically. Check it out on Amazon.

Morals of the Fin de Siècle: Marc Lowenthal on Atlas Press’ The Tutu

My first encounter with London’s Atlas Press was in the late 1980s, when I was given a copy of David Gascoyne’s translation of André Breton and Philippe Soupault’s Magnetic Fields. With that book, they immediately became the first publisher I decided to trust blindly, and I’ve done my best to read everything they’ve published ever since—which hasn’t always been easy, given their on-again, off-again availability in the US. With ARTBOOK | D.A.P. now distributing them this side of the waters, it’’s a good time to start diving back into their catalog of extremist literature—now a full 30 years’ worth of forays into what they call the “anti-tradition” of the more “belligerent avant-gardes” of the last 200 years. 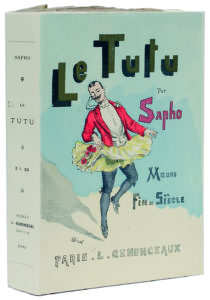 Above: The finest known copy of the first edition. Photograph courtesy of Pierre Saunier.

And there really couldn’t be a better place to start than their new release of the first English translation of the 1891 French novel, The Tutu, written by the pseudonymous “Princess Sappho” (and translated by Iain White, whose name always graces the most interesting of literary translation projects, from Marcel Schwob to Thomas Owen to Jean Ray). Among other things, The Tutu has introduced me to the fact that there was a name unknown to me in the lineage of such publishing heroes as Eric Losfeld, Barney Rosset, Régine Desforges, and other such frontline defenders of the freedom of speech: their predecessor, the enigmatic Léon Genonceaux. Apart from being the presumed personage behind the Princess Sappho nom de plume, he was also the publisher who properly introduced the work of both the infamous Comte de Lautréamont and Arthur Rimbaud to the French public. Doing so earned him legal headaches and a hefty enough fine for him to leave France before eventually disappearing from literary history altogether after 1905.

His escape from the legal proceedings over his publications also apparently led him to scrap his plans to publish The Tutu: Morals of the Fin de Siècle, just as it was coming off the press. Reading it now makes his decision understandable (even if it leaves the reason as to how the novel has languished unknown for over 100 years, with only five copies currently known to exist, a bit perplexing): The Tutu had obviously been intended to stand as the decadent novel to out-decadent all the decadents. The very pseudonym stood as a nose- tweaking to the censors (even if Genonceaux would quickly retract the tweaking once the legal troubles kicked in), as Sapphism was the theme to bring about the most legal woes upon nineteenth-century French publishers (most famously for Baudelaire’s Les Fleurs du mal). Given that the theme is utterly absent from The Tutu, his desire to provoke by all means necessary seems clear. The novel’s broader storyline, however, is actually standard bourgeois fare: a young society man (the fancifully named Mauri de Noirof) finishes his schooling, loses his virginity, seeks marriage, finds a wife, tries to build a career, and eventually finds true love after his wife dies in the midst of an adulterous affair. Our young protagonist, though, is something of a kid brother to Lautréamont’s Maldoror. Our hero’s true love is his own mother, who finds him a wife after refusing to sleep with him (or allow him to marry a tree); his subsequent wife the obese barrel-shaped Hermine, who consumes auto-mined snot pellets in between endless glasses of Kümmel and Chartreuse; his career the abandoned fabrication of a pneumatic train tunnel; and his own adulterous affair is with a two-headed, four-armed-and-legged carnival performer named Mani-Mini.

All of this is steeped in one of the most extraordinary soups of effluvia this reader has ever encountered: excrement, phlegm, vomit and bodily corruption reach what I’d venture to call poetic heights in these pages (with two particular heights that actually managed to make me gag). The fundament is fundamental here, and perhaps tweaking the notoriously misogynistic philosopher’s nose, Genonceaux here utilizes the Schopenhauer so dear to the decadents in the form of Noirof’s mother, who utters such memorable phrases as: “The most beautiful of women are only composed, chemically speaking, of the quintessence of faecal matter;” or more broadly: “The soul is no more than the ferment of matter.” (A phrase arguably surpassing that of the anticipatory plagiarist Alfred Jarry, who would later write: “The soul is a tic.”)

Genonceaux had obviously done more than just publish Lautréamont: he took the poet’s baroque excesses to heart and with The Tutu aimed to raise the ante. (A few pages from Maldoror in fact make their way into the novel in the form of Noirof and his mother’s favorite reading material, but our hero also pays his own visit to a God as debauched, if somewhat more refined, than that of Lautréamont.) Yet for all that, the novel manages to rise above being mere schoolboy antics: its writing is sharp and often quite humorous, its aims obviously satiric, the characters oddly sympathetic through their repugnance, and the pessimism almost joyous in its excesses. The book is also remarkably modern for something that was to have been published in 1891, with dialogue and narrative devices that evoked Raymond Queneau to me more than J.-K. Huysmans. (In fact, if I was to describe the novel in one sentence, it would be “Maldoror as written by Raymond Queneau.”)

When I first read about this book’s forthcoming publication, it had almost sounded like a literary artifact that Atlas Press would have had to invent if it hadn’t existed. Now that I’ve read it, it still seems too good to be true: the missing, unknown link between the French fin-de-siècle and Alfred Jarry’s Ubu roi and all that was to follow. This is one wild, fermented read, and deserving of attention from finer readers this fall. It has been released alongside Atlas Press’s other fall title, Winter Journeys: an Oulipian collection of tales concerning the unknown Hugo Vernier—the missing-link French author who was plagiarized by everyone from Baudelaire on—who in retrospect makes for an interesting fictional colleague for Genonceaux this season.

Genonceaux became notorious in 19th-century Paris for publishing scandalous works of literature that no one else would touch. He was the first to publish Rimbaud’s poems, and was once taken into custody for publishing immoral work. But he also wrote a novel of his own, which he published under a pseudonym in 1891. From there, the life of The Tutu becomes as fascinating as the novel itself. Almost the entire print run vanished immediately, dooming the novel to decades of obscurity. (Today, only five copies of the first edition remain.) The plot, although incidental to the wicked, delirious wit that gives the book its brilliance, involves a young Parisian man named Mauri who is prone to losing fortunes, cheating on his new wife, and bouts of megalomania—at a party, he leans against a wall, “musing upon human stupidity and the universal law of hypocrisy.” Yet Mauri is no genius, and his exploits around Paris are ridiculous, fanciful, and depraved; one lover is a two-headed woman, another sleeps with snakes and other animals in her bed. If the novel were better known, we’d insist that it influenced everyone from Henry Miller to P.G. Wodehouse to John Kennedy Toole. Since it isn’t, we have to settle for saying that it was simply far, far ahead of its time.