Review of Contemporary Fiction (we have no date for this review). 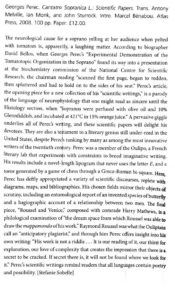 This is an English edition of a book that originally came out in France in 1991.  One of the papers was in fact written in English, but the other four, including a study of Raymond Roussel’s relationship with Venice that was co-authored with Harry Mathews, have been ably translated by the likes of Antony Melville, Ian Monk and John Sturrock.

That these are minor works can hardly be denied (though it must be conceded that most of Perec’s works, even the dazzling A Void, stand in the shadow of the gargantuan Life a User’s Manual), yet they confirm and renew one’s respect for Georges Perec as a virtuoso artist, a writer’s writer.  And not only because of his complete mastery of the Harvard referencing system, deeply impressive though that is.

On a naïve view, science represents reality (or at least it aims to do so) and it is from this that its power to manipulate nature derives.  Perec gently undermines this notion by showing that the scientific paper is mainly a matter of style; these writings are rhetorical in exactly the same way as the dream accounts that Queneau wrote in response to Perec’s own La Boutique obscure.  Or as the 99 versions of the same story in Queneau’s Exercises in Style (with respect to the book under review, see in particular the mathematical version of the story ).  Along with an objective, investigatory prose, Perec marshals tables of data, graphs of various kinds (histograms, line graphs, scattergrams), footnotes, diagrams, schematic maps (with coding keys naturally) and flow-charts.  This formidable apparatus is used to parody the way in which science attempts to represent, define, control and manipulate ‘the real’.  Yet perhaps it was the uncertain, open-ended, undecided (or yet to be decided upon) nature of scientific discourse that most attracted Perec.  There is something vaguely comforting about a hypothesis that requires further tests; you don’t have to lay down your life for it.

In the paper, ‘Experimental Demonstration of the Tomatotopic Organisation in the Soprano’, Perec’s deadpan humour and sense of the absurd are much in evidence.  Amongst many nods, winks and jokes, and much silliness, he alludes to one of neuroscience’s classic papers, ‘What the frog’s eye tells the frog’s brain’.

Elsewhere, the comic effect is more subdued, but there are still jokes to be found.  A paper about butterflies on the island of Iputupi (the palindrome is a dead giveaway in itself) has a reference to a paper by one ‘Nabokoff’, naturally enough.  And one of the authors has the name of a character in Red Harvest (I think), which kind of makes sense given the fate that befalls the butterflies.

If one were to come across these papers in an academic journal, many readers would be none the wiser; as happened with Alan Sokal’s famous contribution to Social Text in 1996.  For these playful papers are precise examples of the genre.