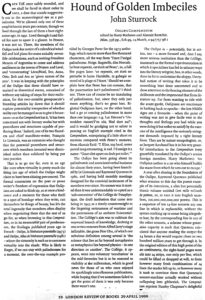 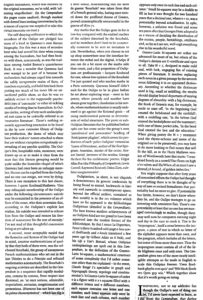 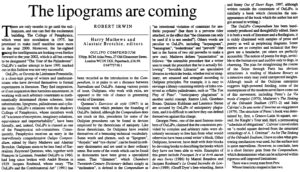 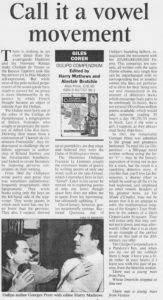 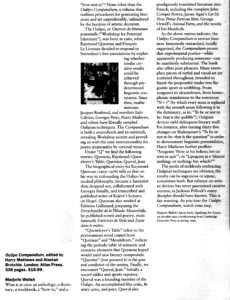 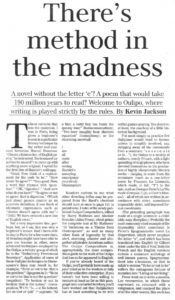 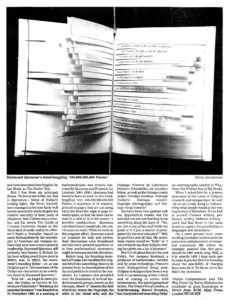 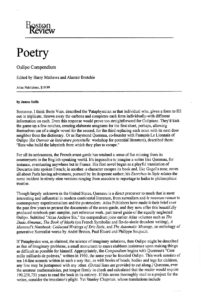 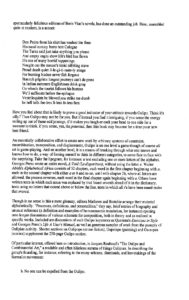 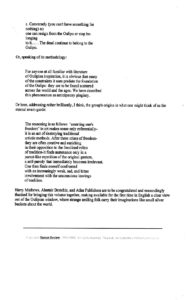 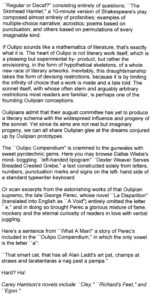 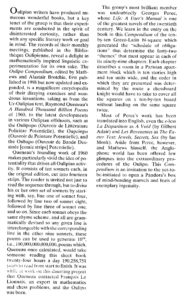 The Guardian and Private Eye. 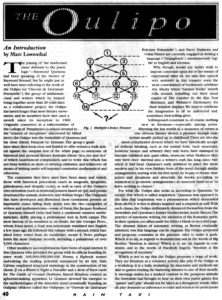 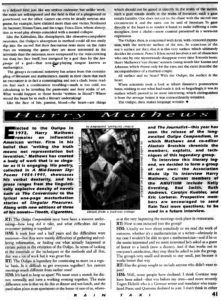 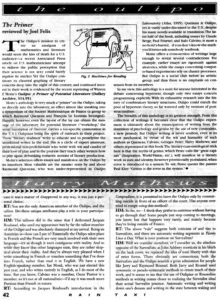 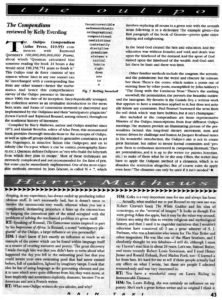 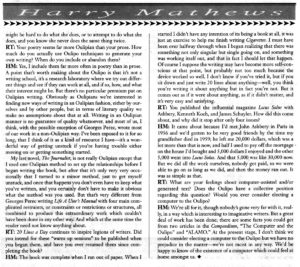 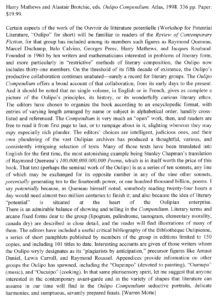 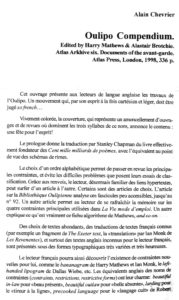 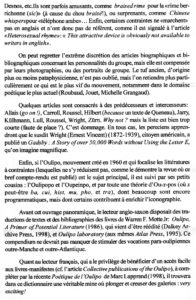 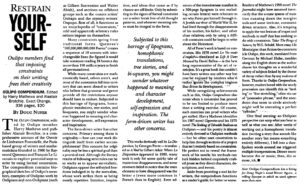 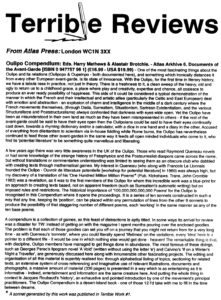 It isn’t quite the long-hoped for Oulipian encyclopaedic dictionary, Le Petit Norbert, but the Oulipo Compendium is certainly all that English-speaking readers could wish for. An alphabetically-arranged survey of all things Oulipian (and, indeed, Ou-x-pian), brimming with examples, it is equally useful for those who have never encountered the work of the Oulipo and for those who are familiar with a great deal of it. It is an essential reference work. And it is actually also a great read.
Oulipo stands for Ouvroir de Littérature Potentielle (generally translated as “Workshop for Potential Literature” — though, curiously, apparently never abbreviated as WoPoLi). It was founded “under the auspices of Raymond Queneau and François de Lionnais on 24 November 1960”. It was in some sense an outgrowth of the College of ‘Pataphysics (of which it is actually a “Co-commission”). The group focusses on all writing that is subjected to “severely restrictive methods” — conceiving of new restrictions, playing with familiar ones, finding historical examples that predate the Oulipo.
“Restrictive writing” may sound rather … restrictive. But most writing does obey certain rules, some of them quite arbitrary. The sonnet is a prominent example: its form and constraints are now taken for granted, but there is nothing natural or free about them. But the constraints of this form have made for some marvelous poetry. Indeed, many people find such constrained poetry more appealing than truly free verse.
Oulipo explores the possibility of other constraints — some of which seem, at first glance, very odd. Among the best-known Oulipian devices are:

More familiar restrictions are also employed in a variety of ways, including anagrams, palindromes, and rhyme. There are also many applications of mathematical methods and rules (most famously, perhaps, Mathews’s algorithm).
And there are many inventive and unusual other restrictions, including:

Among the best known members of Oulipo are Italo Calvino, Georges Perec, Raymond Queneau, and Marcel Duchamp (though the latter was never really a very active member). Current members include Harry Mathews, Jacques Roubaud, and Ian Monk.
It remains a fairly small group that meets once a month. Apparently, no one can be expelled from the Oulipo and “conversely (you can’t have something for nothing), no one can resign from the Oulipo or stop belonging to it.”
Fascicles of the work of Oulipians are regularly published (in editions of 150): these make up the “Bibliothèque Oulipienne” (a summary of each of the first 92 volumes is included in the Oulipo Compendium). In addition, many of the apparently “mainstream” works of the Oulipians use a variety of constraints. The most famous of these is certainly Georges Perec’s Life A User’s Manual.
There are also many authors who are not affiliated with the Oulipo who have written works using similar constraints. Among the prominent examples cited in the Oulipo Compendium is Walter Abish’s Alphabetical Africa (“an Oulipian masterpiece” which has 52 chapters, the first (and last) of which uses only words beginning with the letter “a”, the second (and second to last) only words beginning with “a” or “b”, etc. all the way up and down the alphabet) and Doug Nufer’s Never Again, a 200-page novel in which no word appears more than once.

After a brief section outlining the Directions for Use, the Oulipo Compendium has as a Preface one of the most famous Oulipian texts: Raymond Queneau’s 100,000,000,000,000 Poems (as translated by Stanley Chapman). This is essentially the founding text of the Oulipo. It consists of ten sonnets with completely interchangeable lines (the first line of each of the ten sonnets can be followed by any of the ten second lines, each of which in turn can be followed by any of the ten third lines, etc.). There are thus literally 100,000,000,000,000 poems — or that many ways of reading this one poem
Queneau’s poem is usefully printed one sonnet to a page (blank on the back), with dotted lines where readers can cut so that they can easily flip from line to line, creating their own readings. (We suggest photocopying the pages and making your own text rather than chopping up the book itself.)
This is apparently the first English publication of this seminal work. Impressively rendered in English by Chapman, it is certainly one of the highlights of this volume — though there are pleasures to be found and discoveries to made on practically every page.

The bulk of the compendium is an alphabetical survey of all things Oulipian, itself prefaced by Jacques Roubaud’s amusing and informative piece, The Oulipo and Combinatorial Art.
The compendium then goes through all aspects of Oulipo, providing brief biographies of all the members, summaries of many of the most significant works, and explanations of all the Oulipian terminology. Peripheral figures and constraints (from Raymond Roussel to various cases of anticipatory plagiarism) are also covered.
The entries are concise and clear — providing even OED definitions where applicable. And there are a vast number of illustrative examples.
It is the often ingenious Oulipian excerpts that make for much of the entertainment. Whereas some of the exercises can, if presented in their entirety, be somewhat wearing, the many variations and excerpts constantly offer something new and different. And show how potentially rich constrained writing can be.
There are any number of examples, ranging from a few words or single lines to several that cover a few pages. Among those that are particularly noteworthy (though it is hard to winnow the examples) are Harry Mathews 35 Variations on a Theme from Shakespeare, which usefully demonstrates many constraints using the source-sentence: “To be or not to be: that is the question”, and Georges Perec’s epithalamium Lines read at Alix-Cléo Blanchette’s and Jacques Roubaud’s Bridal (using only the letters in the names of the bride and groom), impressively rendered in English by Harry Mathews.
The summaries of the volumes of the “Bibliothèque Oulipienne” are also useful — though they also make one quite eager to see the actual works themselves. Whether François Caradec’s Fromage ou desert ? (BO 37), written entirely in interrogative sentences (i.e. questions), or the collective Troll de Tram (BO 68), a set of texts for each of the sixteen street-level tram stops of a new streetcar line in Strasbourg using a variety of Oulipian conceits, the descriptions and samples in the Oulipo Compendium show the startling range of possibilities of constrained writing — and whet the readers appetite for more of it.
There are also examples of writing with Oulipian affinities by others, including Walter Abish and Gilbert Sorrentino. One highly entertaining example is a “translexical translation” of Hamlet by Richard Curtis, The Skinhead Hamlet, which indeed “carries the exploitation of a specific restricted vocabulary to wonderful extremes.”

The Oulipo is the best-known group, but the methods and approaches have also been adopted in other fields. (In fact, the Oulipo has direct precursor in the Bourbaki group, which tried to “perform an Oulipian rewriting of mathematics” (so Jacques Roubaud).) The off-shoots are discussed in the last sections of the Oulipo Compendium.
Among them is the Ouvroir de Littérature Policière Potentielle (Oulipopo), devoted to crime and detective fiction. A “potential criminology” is explored here by Jean de Porla using the example of Cain and Abel (and examining the 125 possible versions of this story). The perfect crime and the palindromic detective novel are just a few of the other subjects considered.
There is also the Ouvroir de Peinture Potentielle (Oupeinpo) which explores the possibilities of painting within constraints. The section is usefully illustrated: what sounds fairly far-fetched proves to also offer rich rewards.
The final section collects the diverse other Ou-x-po’s, including those for comic strips (Oubapo), cooking (Oucuipo), history (Ouhistpo), music (Oumupo), photography (Ouphopo), and tragi-comedy (Outrapo). The graphic work of the Oubapo is, of course, the most accessible here, and a number of examples (including ones by Killoffer and Art Spiegelman) show the great potential of applying rules and constraints to comics. Palindromic comic strips ! Overlapping ones ! And much more.

The Oulipo Compendium is a handy, comprehensive compendium of most everything to do with Oulipo. An essential reference work, it can actually also be read (and thoroughly enjoyed) front to back (or back to front (or using any constraints a reader might wish to impose)). It is a very entertaining work throughout — most of the information one could want can be found here, as can useful examples and tangential titbits. Nicely presented, neatly (and extensively) cross-referenced it is also easy to use.
A basic reference text, a must for anyone interested in the Oulipo, and highly recommended for anyone interested in literature.