Anicet or the Panorama — Reviews 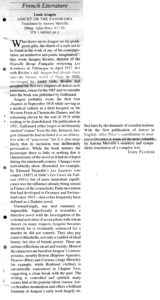 Anicet or the Panorama – a Dadaist novel

This is the weirdest novel I’ve ever read. Not surprising, I suppose, since it was mainly written in the hell of the Western Front in the First World War, where its author was a medical orderly, and because it’s an early literary example of Dadaism.

Whether that word derives from a random stab at a dictionary, the Romanian word for “yes” [twice], the French word for “hobby-horse”, or invented gobbledygook, it means something crazy, surreal, nihilistic, two-fingers to all established rules and opinions. So reading Anicet is like being in the company – simultaneously – of Lewis Carroll, Marcel Proust, Spike Milligan, Buster Keaton, and Marie Lloyd. Since Western civilisation is destroyed, the book seems to say, let’s have a ball!

The plot? Um… let’s just say that a very peculiar young man — Anicet — travelling through a Parisian hall of mirrors in the thrall of a mysterious and beautiful woman is seduced into a life of nonchalant crime until he self-destructs.

As in an experimental film, there are jump cuts, time-shifts, abrupt changes of place and space, and – sometimes – breath-taking rhythmic somersaults that left this reader in need of frequent gulps of absinthe.

Here’s a flavour of the prose — and the translation by Anthony Melville, who also writes the illuminating introduction and provides the notes [many of Aragon’s characters are based on friends and contemporary “celebrities”] is sparkling. Anicet is walking down the mysterious Passage des Cosmoramus [based on two real Parisian “passages”] which changes shape around him:

“From the naturalist’s shop, unnoticed by me till now, the wildlife — identical in every detail to the engravings in rare books — escapes to populate the branches, thickets and creepers, but though the musk rat, cassowary, otter, eider, Siberian squirrel, and golden carabus beetle have been restored to life, they all retain the shabby, dusty look of stuffed animals. The vegetation becomes so dense and the animal life so abundant that nature takes possession of me; I feel constricted, suffocated, strangled: worm-like creatures brush against my face, while insects crawl under my clothing. The sheer strength of my imagination overwhelms me with terror despite all my efforts to persuade myself that I am not in danger, that it is all an illusion, that the singing birds are just wallpaper designs, that the scratching of the jackals’ claws on the dead leaves, the howling of the white wolves, the hissing of the boa constrictors are all merely the whirring of sewing machines; that the man devoured by a tiger, leaving only his head and shoulders, is just an advertisement for hair dye.”

And if this is all too feverish for you, there are some good jokes too. In his cell before his trial for murder, Anicet faces his defence lawyer:

“Anicet: Poor Atheists! What do you think?

Lawyer: I am a free thinker.

Anicet: Oh really. You will go to Hell. I shall pray for you…

Lawyer: This is mania.

Anicet: You’re the one who said it. Do take off your coat. I have a whole lot of crimes on my conscience.”

And so this strange novel sways on, like a flaneur on a day out, observing, mocking, dreaming, unjudging. Go with it. You won’t be bored.

Anicet or the Panorama – a Dadaist novel. By Louis Aragon. Translated and introduced by Anthony Melville, Atlas Press, £17.50.

Anicet or the Panorama by Louis Aragon (Atlas Press)

The beauty of DADA is that it came from total disaster, in other words, total destruction.  Out of the ashes of World War One, came DADA.   Like pollen floating in an air stream across Europe, writers/artists got a whiff of it, and it stayed within their DNA.  Perhaps the first literature to come out of the French DADA world is Louis Aragon’s “Anicet or the Panorama.”  It’s a dis-jointed tale of crime life, but told by a writer that is not overly concern about narration from A to Z.   That map is re-written by Aragon, who uses the life surrounding him at the time, which means Andre Breton, Max Jacob, Picasso, and others, who all make an appearance in this work of “fiction.”

World War 1 changed the young doctor Aragon, and the future World War 2, will change him again.  So what we have here is a very young Aragon facing up to, as well as articulating the world around him – which is Paris 1918/1919.   A snapshot of the time especially with the cinematic references (Pearl White serials, Fantomas) but nevertheless, a snapshot taken by a poet with his poetic sensibilities in place.

Once again, Atlas Press, goes beyond their duty to come out with another beauty of a production, which is this book.

Anicet, or the Panorama Louis Aragon, translated by Anthony Melville

Anicet is, as its cover proclaims, a Dadaist novel, reissued on the centenary of its composition. Louis Aragon would doubtless have been delighted to learn that it is almost impossible to review.

An art critic, with his ‘little gadgets… called criteria’, is satirised in these pages as a kind of ‘policeman’, whose mission is in fact to seek out artists whose theories and works might disturb the peace… At the slightest threat of disorder the critic must set things right by exposing fraud and anarchy.

Here, in pre-emptive defiance, is a ‘novel’ which is nothing but ‘fraud and anarchy’: a work in which there is no coherent plot, no illusion of character, written in a style riddled with self-mockery.

The extraordinary root-and-branch nihilism of the Dadaist and Surrealist movements makes sense as a reaction to the extreme horrors of the first world war — though one can imagine the howls that would have greeted such a statement, since the movements proclaimed that nothing ‘makes sense’. Aragon began writing Anicet as a 20-year-old medical orderly in a field hospital on the Western Front. He was buried in shell explosions three times in one day, and was awarded the Croix de Guerre. There is nothing, however, about the war in his book: ‘Being a war veteran was frowned on by our group and… we considered the wish to write novels to be as tasteless as the Croix de Guerre that I had to hide in shame.’

This novel-which-is-not-a-novel is hardest work in the opening couple of chapters. A young man, Anicet, who does not believe in concepts of time or space, meets a stranger called Arthur, whom he recognises as equally liberated because he is enjoying his meal without actually eating it. Arthur, it becomes evident, is Rimbaud. I did guess this one; but when seven masked men intruded into the plot, bearing gifts (a glass ball, a scrap of silk, a mandarin orange, a cryptogram, the measure of an ohm, a railway signal and a photograph) for a mysteriously compelling woman, I gave up and turned back to the introduction.

This helpfully gives a key to some of the non-characters. André Breton, Jacques Vaché, Picasso, Charlie Chaplin, Jean Cocteau, Paul Valéry and Max Jacob all make appearances (though don’t expect pen-portraits). It also, most usefully, identifies the vampish beauty on the book’s cover, the film star Musidora, who was the acknowledged inspiration for Aragon’s central non-character, the amoral beauty, Mirabelle.

Musidora played Irma Vep (anag), a singer and a member of the gang of thieves called the Vampires in a series of beguilingly stylish, supremely silly and addictively fast-paced short prewar films. Like The Avengers, they featured a lithe, deadly woman in a thrilling catsuit. One can find the whole series online: the titles of the shorts give their flavour (The Severed Head, The Ring that Kills, The Red Codebook, The Spectre, Dead Man’s Escape, Hypnotic Eyes), as do the synopses of the plots (‘Satanas paralyses Philippe with the poisoned pin in his glove and leaves a bomb in a top hat to kill him off’).

Anicet himself specifically draws the analogy between the world of his novel and cinema: in the hectic plotting of The Perils of Pauline, there is, he says, no place for morality — just ‘speed’ that leaves ‘room only for gestures’.

In this modern world, ‘all that old psychology, regret, conscience, prejudice, lack of prejudice can go on the scrap heap in one block’. When the (non) hero receives a letter from his mother pleading for his return, he makes a very precise cone of the paper and sets fire to it. Our dismay, however, is undermined because the letter itself is written in the stilted melodrama of cinematic title-cards.

Once the novel gets into the surreal rhythms of the silent cinema it rattles along, with dreamlike jumps and elisions, through murder, marriage, theft and suicide. There is a passage which exemplifies this technique when Anicet burgles the salon-studio of Blue (Picasso), in a darkness illuminated by his swinging torch-beam:

If we had only one fact at a time about the world, and we lacked our faculty for bringing together a thousand perceptions and concentrating them on a single object, we would be constantly in the state our hero was in… Every time he bumped into an object our young villain sketched out the aspect of this paradoxical world using his torch as a paint-brush, and had no idea how to link this new phenomenon to his previous discoveries.

In a more conventional experimental novelist, this almost autistic experience of a lack of central coherence could be used to create wonder — a childlike or ‘Martian’ shedding of familiarity — or alarm. In Anicet, it does neither. The true nihilist is liberated by nothingness: ‘The marvel of our lives is that nothing is as important as we deem it to be.’ Under the phantasmagoria of the world lies only an ‘immense ennui’; non-chalant indifference is the ultimate aim.

How do you describe ‘ennui’ without becoming boring? Aragon manages it: this semi-novel is never dull; but it is certainly exhausting.