MARCEL DUCHAMP AND THE BARONESS

by DAWN ADES and ALASTAIR BROTCHIE

Our previous article in The Burlington Magazine, constituted a detailed critique of all of the evidence presented by Spalding and Thompson to support their contention that Duchamp stole Fountain from the Baroness Elsa von Freytag-Loringhoven. They have not responded to this critique, and nor has Irene Gammel whose evidence on this matter was likewise shown to be incorrect or unprovable. We therefore published a follow-up letter in the Art Newspaper, which is reproduced below, followed by the responses of Spalding & Thompson, and by our replies to them. Since their responses are public letters, we assume they will not object to their appearance below, especially since we are simply following their own example when they published their correspondence with the director of Tate Modern and with other officers from this institution in The Jackdaw.

In November 2014, The Art Newspaper published an article by Julian Spalding and Glyn Thompson called “Did Marcel Duchamp steal Elsa’s urinal?” Their contention was that the artist and poet the Baroness Elsa von Freytag-Loringhoven was responsible for submitting the famous Fountain, an upturned urinal signed R.Mutt, to the Independents exhibition in New York in April 1917. These assertions appeared to confirm the worst suspicions concerning the art-world patriarchy, and so have become widely distributed on the internet.

This controversy was recently revived when, in November and December, two articles in The Burlington Magazine, by Bradley Bailey and then by ourselves, refuted these assertions in great detail. An updated version of the latter, a summary of the facts, can be found at https://atlaspress.co.uk/marcel-duchamp-was-not-a-thief/. Spalding and Thompson have yet to respond in a reasoned manner, and Spalding’s website continues to call Duchamp a thief and claims that “The Art World has been lying to us”: classic conspiracy theory rhetoric (note the capitals!).

Spalding and Thompson have never produced any evidence that connects the Baroness with Fountain; only interminable speculations about what might or could have occurred if their theories happened to be true. These speculations have been refuted or shown to be unproven in the articles mentioned, but they are all anyway irrelevant unless Spalding and Thompson can answer the only question that matters: “What evidence connects the Baroness to Fountain?”

If they cannot provide this evidence then their only honourable course of action is to admit they were wrong, or must be presumed to be deluded. However, we recall the old saying: “Reasoning will never make a man correct an ill opinion, which by reasoning he never acquired”. We are not holding our breath!

This letter was accompanied by the following responses: 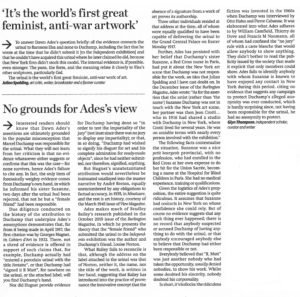 Our response to the above.

We asked a question: “What evidence connects the Baroness to Fountain?” Neither Spalding nor Thompson answered it.

Our reply to Spalding:

A detailed reply to Spalding’s cursory response is obviously unnecessary since it consists mostly of his own opinion. He also appears not to have understood our question, because the only facts he refers to (Duchamp’s letter and the availability of the urinal), do not at all connect the Baroness to Fountain. Both of these pieces of “evidence” have also been shown to be unproven in our previous article.

Our reply to Thompson:

Thompson’s reply to our letter repeatedly addresses only one of its authors: a basic incivility, and like Spalding, he does not answer the question we actually asked. We shall go through his response in detail, and we ask him again to afford us the same courtesy with regard to our previous article (in its revised version as published on this website).

We have never claimed that there is much in the way of documentary evidence from April 1917 that Duchamp was responsible for the urinal since it was submitted pseudonymously, but there is a huge amount of subsequent and contextual evidence that does exactly that, in particular Louise Norton’s interview and article published by Bailey (a refutation of Spalding and Thompson’s argument that they have yet to comment on).

By the same logic – you can’t have your cake and eat it – what evidence, then or afterwards, connects the Baroness with Fountain (the question we asked)?

And yet evidence connecting Duchamp is not entirely lacking. Alfred Stieglitz, for one, certainly suspected (or perhaps knew of) Duchamp’s involvement from the start, he wrote to Georgia O’Keeffe on 19 April 1917: “There was a row at the Independents – a young woman, (probably at Duchamp’s instigation) sent a large porcelain urinal on a pedestal to the Independents…” (The Baroness, incidentally, was 43 at the time.)

Duchamp’s letter to his sister can be interpreted in various ways of course, as we have previously shown. We return to this letter below.

Thompson writes that “Due diligence … demonstrates that the first citation [that Fountain was by Duchamp] was by Georges Hugnet … in 1932” etc. This would be unsurprising because Hugnet was the first serious French historian of Dada. However, we have never once mentioned Hugnet in any of our texts on this matter, and what he wrote is irrelevant to our disagreement with Spalding and Thompson.

More relevant is that Mr Thompson is wrong.

The first mention of the urinal in connection with Duchamp that we are aware of dates from February 1919. Francis Picabia, in his regular news bulletin of what his friends were up to, in 391 (no.8, p.8), wrote: “Marcel Duchamp parti à Buenos-Ayres pour y organiser un service hygiénique de Pissotières – Rady-made [sic]” (Marcel Duchamp left for Buenos Aires to organise a hygienic service of urinals – Rady-made). Thus Fountain was identified as a readymade soon after its exhibition – Spalding and Thompson have repeatedly denied that Fountain was a readymade (e.g. in The Jackdaw, 4.7.2015, p.7), because that would mean it was by Duchamp.

But we note too that André Breton, in his essay “Marcel Duchamp” (Littérature 5, October 1922, p.9), alludes to these words from the editorial in The Blind Man (May 1917) on Fountain: “Whether Mr Mutt with his own hands made the fountain or not has no importance. He CHOSE it.” Breton commented: “… the personality of choice, whose independence Duchamp is one of the first to announce by signing, for example, a manufactured object…”

There is, by the way, at least one other mention before Hugnet of the urinal being by Duchamp, which we will leave to Thompson to diligently discover!

Thompson then refutes two phrases which we assume are citations from Hugnet: “in order to test the impartiality of the jury” and “Duchamp had wished to signal his disgust for art and his complete admiration for ready-made objects”. The fact that Hugnet is perhaps wrong is completely irrelevant, in a reply to our letter, unless we said he was right.

We did not say that, and it is dishonest of Thompson to imply that we did.

His next point is that the handwriting on the exhibition label was not Louis Norton’s. However, her statement cited in Bailey’s article is clear: Duchamp “sent it [Fountain] in”, all Duchamp needed was permission to use her address, why would he need her handwriting?

The question of the handwriting is irrelevant, as we have already pointed out in our previous article.

Bailey is then criticised for “introducing into the practice of provenance the innovative concept that the absence of a signature from a work of art proves its authorship.”

Is it too blindingly obvious to point out to that Thompson does precisely the same thing, since the Baroness’s signature is likewise absent?

We have never written or implied that Duchamp’s sister “put it about the New York art scene that Duchamp was not responsible for the work” or even that she put it about that he was responsible. This is another invention of Thompson’s. We merely pointed out that she was in a relationship with the artist Jean Crotti, and that he was on familiar terms with a large number of the people directly involved, and with significant others in the avant-garde, especially Picabia. Thompson’s “contextualisation” of Suzanne as a “nice petit bourgeois provincial, with no profession” seems a little patronising from a professed feminist: she had temporarily signed up as a (war-time) nurse but was also working as an artist. Indeed, Duchamp, in the very same letter, asks about her work and suggests he might get her an exhibition in New York if her work is “not too difficult to ship”. In this letter he is simply telling her what is going on while not revealing his own involvement – it was news to be passed on to friends and family (one of their brothers had a work in the Independents exhibition) – and Duchamp was preserving his anonymity for the reasons we have given in our previous article.

Thompson states that “Ade’s position … assumes that Suzanne had contacts in New York”. It does not assume that at all. It assumes that persons to whom Duchamp assumed Suzanne would pass on the contents of his letter had contacts in New York or the international avant-garde, and just to spell it out, these persons were principally Jean Crotti, her lover, but also her brother, Jacques Villon.

He then states: “there is no record that anybody suspected … Duchamp of having anything to do with the urinal”.

Wrong: see the letter from Stieglitz and the comment from Picabia mentioned above.

In his final paragraph he asserts “that only members could show” works at this exhibition and that therefore Thompson’s critics, those heinous supporters of conceptual art, have confused the “‘no jury’ rule with a carte blanche to show anything”. This is because “they didn’t bother to read the publicity issued by the society that made it explicit that only members could show.” Thompson is determined to disprove that artists could submit anything, because it was to test this policy that Duchamp submitted Fountain.

So it is important that “the publicity” does not support what Thompson claims. The catalogue of the Independents exhibition clearly states: “There are no requirements for admission to the Society save the acceptance of its principles and the payment of the initiation fee of one dollar and the annual dues of five dollars. All exhibitors are thus members…” (Archives of American Art). So yes, you had to be a member, but to become a member you simply had to pay six dollars and then, since there was no jury, you could indeed submit whatever you liked, just as the first line of the editorial in The Blind Man 2 implied: “They say any artist paying six dollars may exhibit.”

So Thompson is wrong again.

We have felt obliged to reply to Thompson’s criticisms of our position. We will be very reluctant to do so again until he answers reasonably and succinctly the two questions we have asked in our follow-up letter to the Art Newspaper, which will be posted on this site following its publication.