The new website is now in operation. It is still a work in progress, and the missing past titles will be added over the next couple of months as we find the time, but all of our in-print titles are now listed, along with the majority of our available out-of-print titles. Some of these are rather expensive (we think) but mostly we have only a handful of copies left, and as ever, this is how we finance our future publications. No doubt there will be glitches on the site, missing links etc., we would welcome notification of these so we can fix them.

Giorgio Manganelli TO THOSE GODS BEYOND, translated by John Walker. 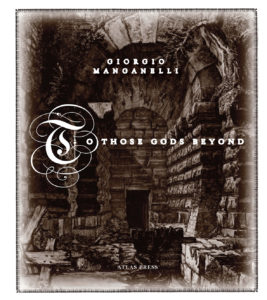 Manganelli is little known or translated in English, but this is one of his greatest works. It is difficult to describe a book that eschews all the usual paraphernalia of a novel: characters, psychology, plot etc. and yet still remains a constantly engrossing read that not infrequently leaves one astounded… A friend of ours described it as “Beckett meets De Quincey in a landscape by Piranesi” which conveys its atmospherics at least. Here is the back cover blurb:

In Manganelli’s innumerable universes, beyond the gods we know or suspect we know is an endless array of other gods. Everything that is seemingly finite or known in our world becomes infinite and unknown. We die, we find ourselves among the other dead, and we die again, only to find ourselves somewhere even more unknown and with death still awaiting. We are both monarch and victim in a gothic simulation illuminated by sombre flashes of sardonic rhetoric that reveal only an astounding desolate wreck. Something of this landscape’s significance can be inferred from Manganelli’s manifesto “Literature as Deception” (1967), which elucidates the author’s notions of the literary “object”, whose devious nature is embodied and mirrored in the elaborate “lies” he constructs here in a style even more lush than the English Romantics he so admired. Manganelli’s paradoxically optimistic fatalism is founded upon a defiance of all the gods — in the knowledge that when they too perish, we are fated to invent others to replace them.

Giorgio Manganelli (1922-1990) is a writer almost unknown in English. He was a central member, with the likes of Eco and Sanguineti, of the Italian avant-garde Gruppo 63, named after its date of formation, and one of the editors of its collective publications. Ever the awkward member of this squad, his writing was greatly admired by Calvino. Manganelli’s theoretical and creative works are deeply intertwined and never more so than with his notorious manifesto (also translated here), which, so it seems, underpins the entire book in a wholly unexpected and original way.

SPECIAL PRICE OF £12 until 8 September.

Journal of the LIP 20: ALFRED JARRY ON THE INSTRUMENTS OF THE PASSION, with related texts. 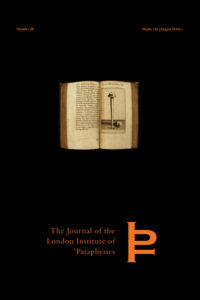 This issue of the Journal will appear on New Year’s Eve, 7 September vulg., it contains Jarry’s essays on The Nails and The Bicycle, along with scholarly expositions on Relics and the Pataphysics of Authenticity. Details to follow nearer the date.

We will have a stall at the London Small Publisher’s Fair, which takes place at Conway Hall, Red Lion Square, 15-16 November. For more details click here.

Work is commencing on a major PATAPHYSICS ANTHOLOGY that we envisage will be at least the size of the OULIPO COMPENDIUM. A lengthy project obviously, it will be compiled in collaboration with Optimates of the Collège de ’Pataphysique and the Foreign Institutes. Since this is a large task we are in the process of recruiting an extensive group of translators so that each need take on only a small number of texts. Those willing to labour in these fields for the glory of the harvest alone are invited to contact us (editor@atlaspress.co.uk), and there will be a special edition for collaborators.